Take a look through the ultimate timeline of Rihanna’s vacations on yachts! 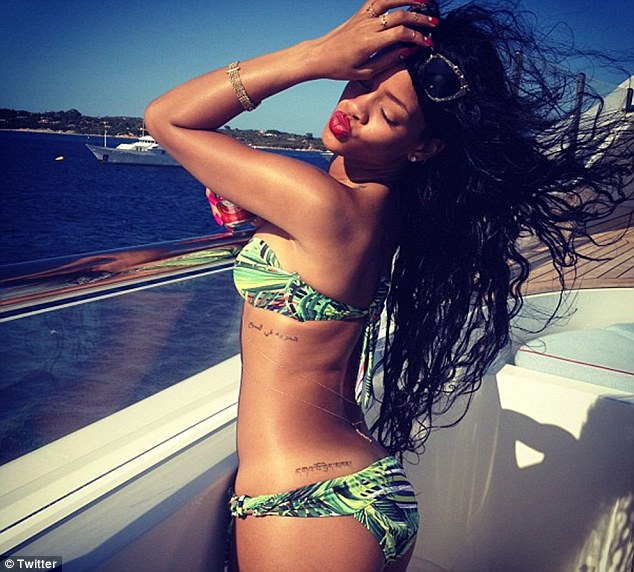 Since saying she was “effectively bankrupt” in 2009, things have definitely turned around for popstar Rihanna. Rihanna’s career as a singer, songwriter, actress and fashion designer and endorsement of brands Clinique, Reebok, Nivea and Vita Coco coconut water have allowed her to enjoy the finer things in life thanks to an estimate net worth of $120 million (2015).

Rihanna was first spotted on a yacht named Latitude in August 2011, and has since enjoyed several yacht holidays, sharing snaps with her 21 million+ Instagram followers, 47 million+ Twitter followers and 81+ million Facebook fans – the singer is even on Snapchat!

Rihanna’s vacations seem to give her a much-needed break from all the drama that went down in 2009, when then-boyfriend, singer Chris Brown was arrested for beating and making threats before the 51stGrammy Awards.

Rhianna and Chris Brown’s on-off relationship (even when he was under probation for the incident) has been heavily followed be the press. She has since tried to get away as often as possible on board a luxury yacht with close friends when her busy schedule of touring and promoting her music allows for it.

She has been seen renting some of the world’s most luxurious ‘superyachts’ available across the Mediterranean – including Sardinia, St Tropez and Monaco- discover why RiRi is very much the Queen of the Superyacht Lifestyle below! 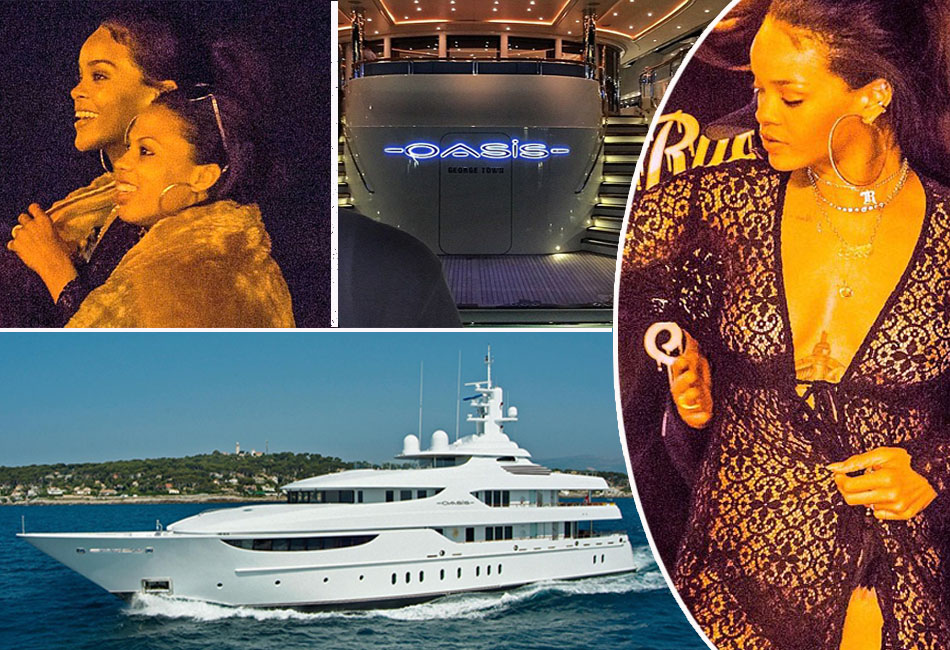 For anyone who’s anyone in the celeb world, the Caribbean paradise of St Barts is the only place to be seen for celebrating the New Year. Rihanna scored an invite to P Diddy’s ultra-glam and ultra-private yacht party this year on board superyacht Galaxy, joining celebs like Def Jam founder Russell Simmons. Rihanna caused a stir at the harbour, arriving to be transported to Diddy’s yacht in nothing but barely-there bikini bottoms and a lacy, black cardigan showing off her amazing body. 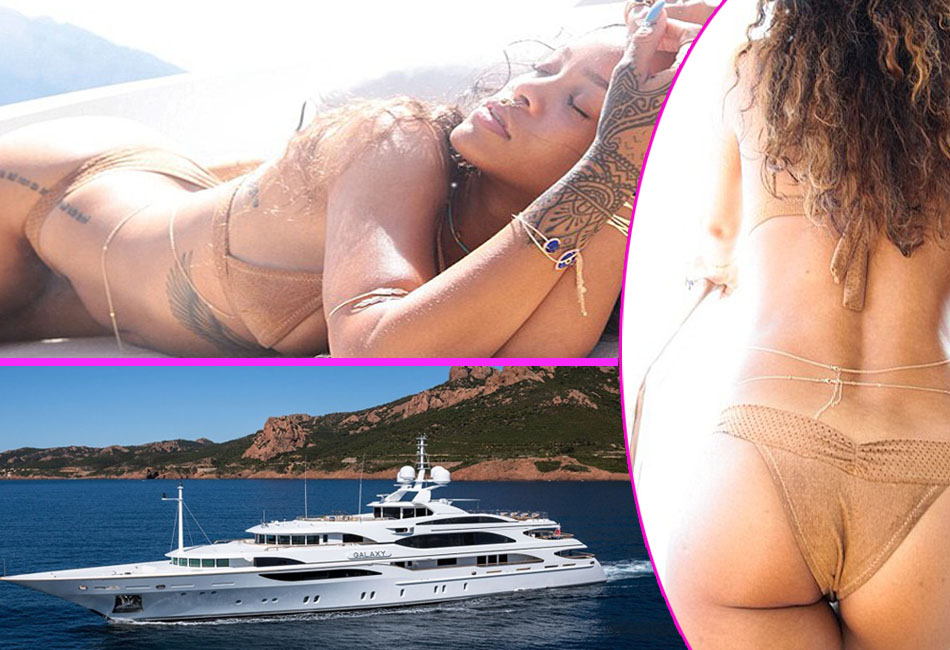 Rihanna had a holiday to remember with her usual crowd of gal pals on board a yacht named Galaxy she rented during time off in the Mediterranean, from late August to early September 2014. The singer showed off her impressive twerking skills on board wearing nothing but a skimpy, skin-coloured bikini and shared some revealing, sultry shots on Instagram highlighting her exotic body art. She also was seen getting extra close with one topless, tattooed female friend on the yacht’s sundeck whilst cruising in Ponza, Italy when not trying out flyboarding and paddleboarding in the ocean. The superstar visited Corsica, Sardinia and finished her trip in the lavish land of St. Tropez. Get all the gossip of her extravagant vacation here. 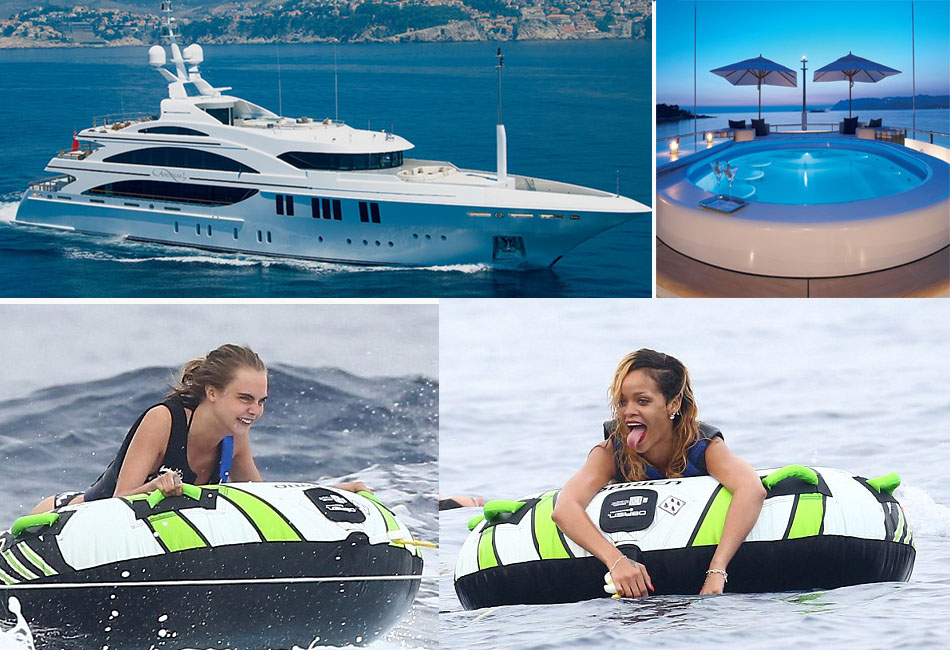 July saw Rihanna and Cara cement their new blossoming friendship with a 2-week private yacht trip in the most glamourous place in the world – Monte Carlo! The gal pals were seen drinking cocktails, beers and tequila slammers, and enjoying watertoys (including jet-skis and a giant rubber ring!) on board a stunning yacht called Andreas L, with a price tag of $388,00 (£250,000) per week! Later Rihanna was seen groping the bushy-browed bisexual supermodel on the deck of the superyacht, see what they got up to here. 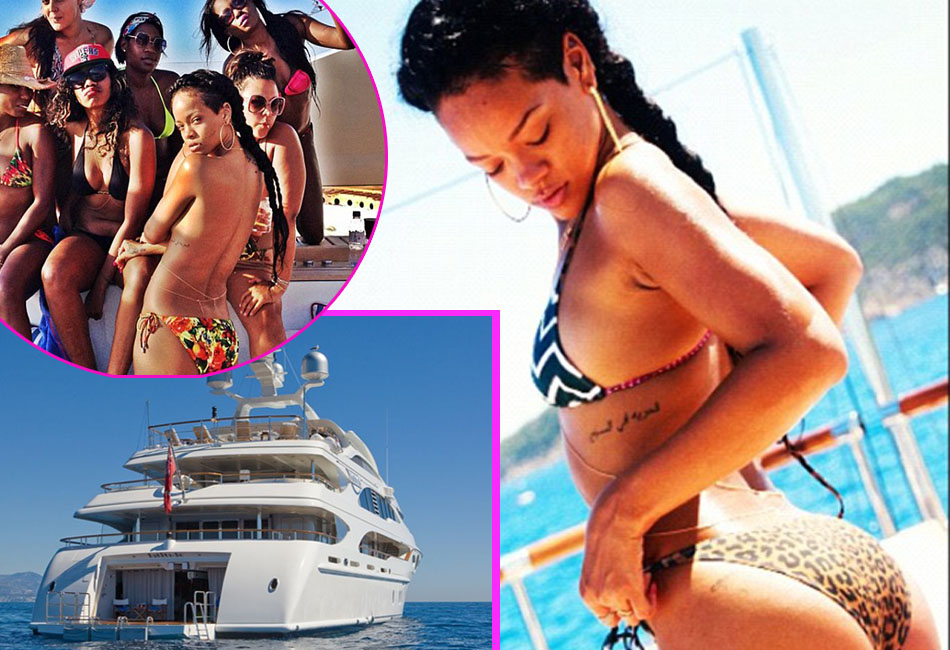 Rihanna once again chose to party wearing as little as possible in the Mediterranean on board one of her favourite yachts, the superyacht Latitude for the second summer in a row! The star tweeted #phuckyojob’ and ‘#phuckyohatin, saying ‘Vaca here we come….’ before being seen partying so hard with her usual group of BFF’s and Basketball legend Magic Johnson from Sardinia to St. Tropez that the French police even visited her superyacht by jet-ski following noise complaints! It was also rumoured that she rekindled her romance with rumoured beau, rapper Drake on board yacht Latitude in between swigging back the beers and some suspicious-looking cigarettes – get all the gossip here! 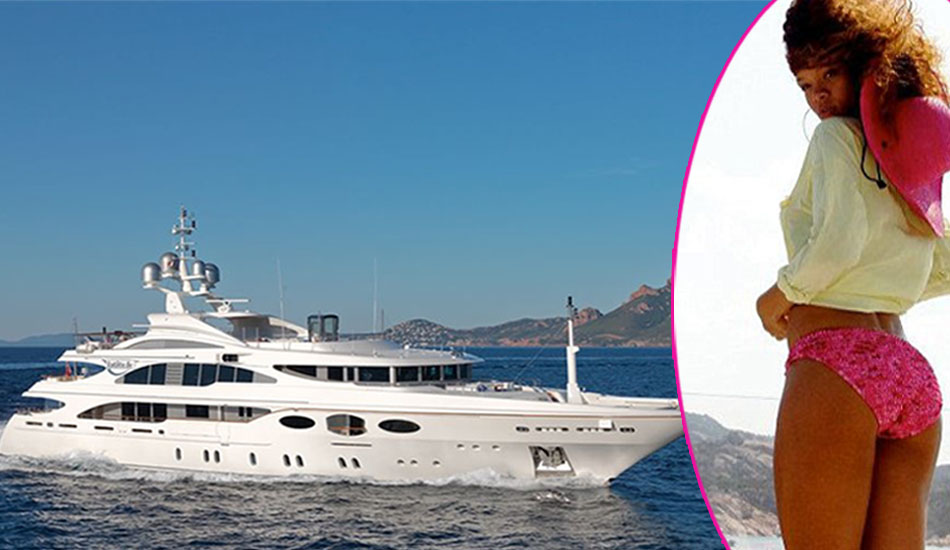 In the summer of 2011, Rihanna definitely channelled her world-famous song ‘Cheers! (Drink to That)’ on a wild cruise in Italy on board the (52m) superyacht Latitude – equipped with gym, huge jacuzzi and elevator – with her closest gal pals. The girls let their hair down sipping Armand de Brignac Champagne (Jay Z’s favourite), smoking cigars and posing for several intimate photos. See more pics and check out the$225,000+ (€200,000) a-week yacht she rented here! 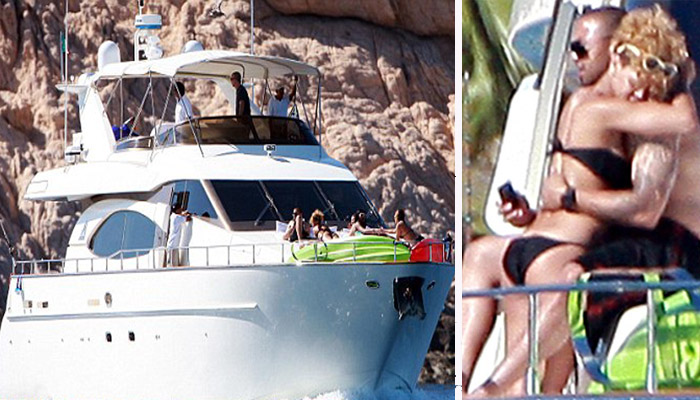 A bikini-clad Rihanna gets a taste for the yachting life by enjoying the affectionate company of new beau, baseballer Matt Kemp on a luxury yacht vacation in the Sea of Cortez in Cabo, Mexico. All done to get over old BF Chris Brown following the domestic violence case around the time of the Grammy’s last year! They are rumored to have been an item since Matt flew out to Dubai to see her perform on NYE. Either way, she definitely had a great experience as it clearly was something she was planning to repeat!